From uPVC to metal and wood... guides and free quotes for all window and door work.

How Much Do Patio Doors Cost?

There are lots of things homeowners can do to revitalise their properties. Even on a tight budget, small and considered changes can make a big difference to the look and feel of a home. You don’t need to spend huge amounts of cash to tweak, improve, extend or replace aesthetic details. 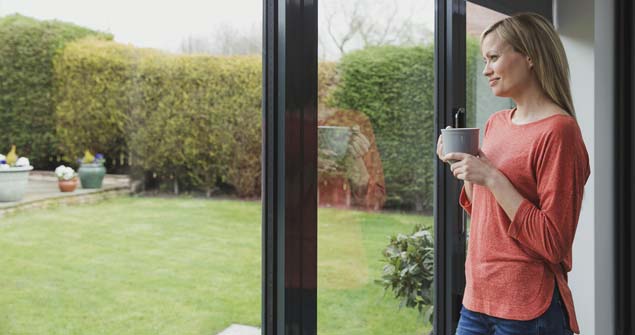 That’s what we’re talking about today; the difference installing a patio door can make to the aesthetic of a front room. It’s a significant change – one visitors are bound to notice – but it doesn’t have to cost all that much. We’re asking is the change worthwhile, how much does it typically cost and what’s the best way to do it.

Patio doors are a common feature of homes with backyards. They provide the necessary degree of security while also letting natural light spill into the garden facing rooms. As they tend to be partially or fully transparent, they remove some of the visual barriers between outdoor and indoor to create the illusion of more light, space and fluidity of movement.

Some Key Features of Patio Doors

Traditionally, a patio door was any sliding door which opens directly onto an outside area. Today, the term is used more broadly to describe French doors, bi-folding doors and doors with other types of opening mechanism. If it opens onto your garden, it’s a ‘patio door’ in modern parlance. As you can imagine, it means there’s a huge degree of variety available.

This variety can be deceptive, however, because replacing existing doors with patio doors requires the two to be reasonably similar, certainly in shape. The only way you’ll get a completely free choice is if you’re starting from scratch. Say you’re building an extension; the opening for the door doesn’t exist yet so you can make it any size you like.

If you’re switching your current doors for patio doors, you’ll need to pay close attention to sizing requirements. This may limit your choices.

Sliding doors are rare in other parts of the house but relatively common in front rooms and dining rooms which open onto back gardens. They’re a superb choice for smaller properties as they take up no floor space; whether closed or open sliding doors occupy the same area. They can also be a handy safety feature. Sliding doors require a push (or ‘slide’) to move so cannot be easily blown shut and trap small fingers. If custom manufactured, patio doors can be made to fit any opening. Most contemporary versions have three cushioned tracks (as opposed to a single track) to increase stability, security and manoeuvrability. This multi-track design also allows for sections which open independent of one another. One side can be opened or both sides can be rolled right back to connect home and garden.

French doors are a good option for homeowners looking to replace a compact door and opening with a similar-sized replacement. They can be installed in relatively tight openings and because they open outwards (with the doors in the garden), they don’t occupy precious space indoors. Like multi-track sliding doors, the best versions hold two doors in two interconnected frames; either door can be used independently.

Some modern French patio doors feature top and side panels which allow more natural light to enter the room. They’re most commonly made from uPVC but, if you’ve got the cash to splash, you can invest in custom made aluminium frames. If you’re planning to install new French doors in your home, we recommend you also add multi-lock security features.

This type of patio door is most similar to the sliding patio door except for the fact bi-folding doors slide inwards in a zig-zagged concertina shape. They can be opened on the right, on the left or from both sides. Some bi-folding doors can be pushed inwards from both sides to create a large unobstructed opening. This makes them the best option for those trying to generate a fluid visual connection between inside and outside spaces.

Unlike French doors, they fold inwards (into the home) so require more space and interior flexibility. You need unobstructed space indoors and outdoors to fully benefit from the manoeuvrability of bi-folding doors. They are undoubtedly the most expensive patio door on our list but also the most visually dramatic and stylised.

As always, there’s no single answer to the question of how much patio doors cost. There are lots of different variables that affect the price such as the type of door, the size of the door and the type of frame selected (wood, aluminium, uPVC, etc).

The typical cost of a sliding patio door is £450. French patio doors are often cheaper at an average of £400 but it depends on your requirements. Due to their sophisticated design, bi-folding doors are by far the priciest option at an average cost of £950. These figures don’t include the cost of installation; we’ll come to that in a moment.

The figures are estimates for doors without any custom features. These are average prices for ‘straight off the rack’ products so don’t forget to budget for any tailormade changes you might need. Depending on how far you’re departing from the door you used to have, changes to door size, frames and security features can be pricey.

While you always have the option to install a new patio door yourself, the risk is you’ll cause damage to the new fixture and its surroundings. We’re not saying it’s impossible or an unfeasible option for everybody, but we want to stress it’s not the best route. For a flawless installation, you need a professional.

Professional installation is likely to cost between £80 and £180 per day. This is a huge gap, yes, but the cost is greatly influenced by the degree of work required. If you’re replacing a small patio door with a similarly sized small patio door, it’s going to take less time and cost significantly less. If you’re creating a large patio door where there was once just a bare wall, it’s going to cost you a lot more money.

Some Important Design Features to Consider

Creating a patio door in a space where there is currently a wall or window is a more complicated job. In many instances, a load-bearing lintel must be installed to ensure the existing wall has enough strength to bear the renovation. Ask your contractor about this if they don’t bring it up with you first. Not all homes need an additional lintel, but it can be a crucial supporting feature. If you need one, you really need one. Don’t ignore it.

If you’re aware of this need for a load-bearing lintel, make sure the quotes you receive incorporate its cost. Compare prices only once you’ve got a comprehensive range of estimates. Ask lots of questions. Don’t feel obligated to choose a contractor just because they’re the one you’ve talked to the most. One of the reasons homeowners miss fantastic deals is because they get trapped by a misplaced sense of loyalty. Until you’ve signed an agreement, you’re a free agent. Shop around find the best deal for you.

Patio doors are a great way to give a home a new lease of life without committing to large scale renovations. Straight replacements (swapping one type of door for another) can be carried out relatively quickly over one to three days. It’s precisely the type of home improvement that’ll make a big difference to how you live without causing too much upheaval or disruption.

If you’d like to know more, fill in the form on our website. We’ll get back to you shortly with quotes from a range of reputable contractors. All contractors have been fully vetted and approved so, if you want the job done fast, you can have a tradesperson in your home within the next two days. Installing a new patio door can that simple.