Keep your home and occupants safe with security guides and quotes .

You don’t need to be afraid of specific threats to invest in a CCTV system for your home. We’ve all got things we want to safeguard – families, pets, cars, gadgets, etc – and a high quality security system is the best way to do it. Regardless of the crime rate in your area, regardless of what you see on the news, if you feel it’s a necessary upgrade, then it is.

We think domestic CCTV systems are very useful and worth your investment. However, it’s important to ensure your household is adhering to basic safety advice before splashing the cash on fancy electronics. For instance, does your home have properly secured doors with strong locks? Are its window frames in good condition? Do you close and lock all windows and doors overnight and when you’re away from the house? 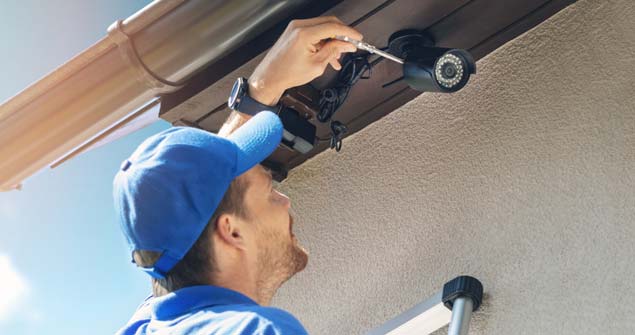 Before you invest in a home CCTV system, make the most of the security features you’ve already got by using them correctly. Then, if you still feel motivated to buy one, proceed carefully. Take your time when browsing for products. Pay attention to key features. Think about what your property really needs from a security system.

The variety of CCTV systems on the market is massive. Home security systems come in a staggering range of styles and specifications which is why it’s important to consider your options. We’ve put together this guide to picking a CCTV system to help you find the right product for the best price. It covers the typical cost of a CCTV system, as well as any installation and labour costs.

The Benefits of Home CCTV Systems and Equipment

The first myth to dispel is the notion CCTV systems are only bought for home security purposes (to deter burglars and vandals). They have many applications including remote monitoring of children and pets, increasing the resale value of a property and upgrading an existing system. You may have recently moved into a new home and want to upgrade the current security system as you do the garden, bathroom or study.

Not everybody buys CCTV cameras because they want to respond to a clearly defined threat. It may sound like a pedantic detail, but it influences the way people shop for this type of technology. In most cases, it’s a proactive measure or just a step taken to improve the value or quality of a property. This lack of urgency gives shoppers plenty of time to peruse their options, but it can also cause them to miss out on key features.

Key Features to Consider When Shopping for CCTV Systems

Immediate notifications, even when out of the house, are now a standard feature of all high tech CCTV systems. Yet, they’re a relatively new addition to the home security arsenal. It’s only within the last decade that our CCTV cameras have been able to ‘talk’ to us by sending mobile notifications and alerts.

They’re invaluable because they don’t rely on outside parties for their effectiveness. Rather than trusting a neighbour to sound the alarm when something is amiss, homeowners can do it themselves because mobile alerts notify them of problems happening right now. We recommend this feature; newer CCTV systems which allow users to view live perimeter streams from their smartphones are some of the most impressive around.

Unless you’re able to constantly monitor the live feeds, you’ll need a security system with integrated storage. Though recording functions are more of a reactive response than a proactive one (you can’t stop it if it’s already happened), they’re a useful tool for monitoring suspicious behaviours and assigning criminal responsibility if things do go wrong.

There are two types of data storage used in modern CCTV systems. Some record footage directly onto an integrated hard drive. Others now dispense with physical storage and automatically upload video feeds to the cloud. While hard drives continue to be very effective tools, there’s a reason cloud technologies are taking over.

Cloud-based storage is almost indestructible. It can be damaged or destroyed by the cloud’s operator. However, when it comes to criminal intent or just accidental negligence (say, you erase an important recording), it is infallible. You can delete footage. Burglars can destroy your camera. It doesn’t matter. The footage exists in a virtual space and can spawn as many new copies as required.

It’s also worth noting there are, theoretically, no storage limitations for cloud-based CCTV systems. You may be required to pay more money to keep a larger amount of footage (it depends on your provider), but there’s no such thing as running out of data space. The cloud is limitless from this perspective.

The main downside is, unlike hard drive recordings, cloud storage comes with a monthly maintenance fee. You should also be aware of its reliance on bandwidth. If your internet speeds are less than an impressive, security feeds may be interrupted due to connectivity issues. If you don’t have fast internet, a hard drive based system might be a better option.

Almost all home security systems, cloud-based and hard drive, have motion detection technologies. Usually, CCTV systems are designed to operate in a low power mode until movement is detected in an area it shouldn’t be. This conserves power, optimises recordings and acts as a preliminary response. Nobody wants their security system to activate at full capacity, alarms blaring, every time it sees a cat.

Typically, infrared sensors are used to detect motion within a clearly defined perimeter, be it a backyard or a front porch. The alarm may not be triggered by a show of movement but, in most cases, the camera will start recording. The homeowner then has video evidence of suspicious behaviour if turns out to be more than the neighbour’s pet.

Over sixty per cent of burglaries occur after dark. This won’t come as a surprise, but it might surprise you to find lots of people still buy CCTV systems with no night vision capabilities. If you don’t have any type of night vision, all of the perks we’ve already discussed are largely pointless if events happen after dark.

Without night vision, even sophisticated recordings are limited in their use. Live feeds are redundant because you can’t see anything. If you’re going to invest in a security system, choose one which is functional every hour of the day. The technologies used to give contemporary CCTV systems night vision are increasingly impressive and worth your time.

This next feature is rarer, but it is rapidly growing in popularity with homeowners. Two-way communications allow for the exchange of speech between a person outside the monitored property and the property’s owner. Theoretically, you could use the function to scare off a burglar by making it clear you can see them.

Although, the feature is more commonly used to speak to couriers and visitors who arrive when you’re away from home. For instance, you could speak directly to a mailman to advise him of where to leave a package.

These days, any CCTV security camera with a resolution below 1080p is considered low relatively quality. For clarity and dependability, look for products equal to or more powerful than this. There are plenty of cheap 720p cameras on the market but, as technology races ahead, they’re settling at the bottom of the pile. For a security system you won’t need to upgrade in six months, spend more for a higher resolution.

Similarly, cameras with framerates of below 25 frames per second are among the lowest quality products on the market. Terrestrial television outputs at 25fps so you don’t want to be dipping beyond this point. If you do, you’ll find recorded footage is often jerky and difficult to decipher. Cameras with 50/60fps are much more powerful and remain very affordable.

Traditional wired systems work every bit as well as wireless CCTV systems if not better because the connection can’t drop out and pause live feeds. However, wired technologies are becoming more unpopular simply because they take too much work. If you can choose between a security system that’s operational in minutes and one which requires a whole day or more of installations, which are you likely to opt for?

Wireless security systems need no hammering or home renovations of any kind. There’s no need to thread wires through walls or across the eaves. Some cameras need to be plugged into power sockets, but they don’t need to be linked to one another (or a data storage device) to communicate. Other CCTV systems are completely wireless and rely on rechargeable battery packs to stay operational.

Some downsides to wireless CCTV systems are their reliance on external power packs. Homeowners must monitor power levels and recharge batteries at the right times otherwise the technology is useful. They’re also not the best option if you have reasons for wanting constant surveillance (as opposed to cameras ‘awakened’ by motion sensors). Wireless systems don’t really have this capability as the power needs are too great.

The Typical Cost of Buying and Installing Home Security Systems

Now, let’s turn to the likely cost of a new home security system. Do be aware these figures are estimates only. The total cost of your CCTV system is likely to be affected by the number of cameras, the sophistication of its features (two-way communication, mobile alerts, etc) and the location where you live. For this reason, it’s tough to come up with an accurate average.

In the next section, we’ll discuss typical costs and installation expenses for both basic and high-end products.

The average cost of a basic CCTV system with two cameras (plus installation and labour costs) is around £360. The cost rises to £560 for four cameras and £950 for eight cameras.

The average cost of a state of the art CCTV system with two cameras (plus installation and labour costs) is around £480. The cost rises to £780 for four cameras and £1,380 for eight cameras.

The average cost of a wireless CCTV system with two cameras (plus installation and labour costs and hub and cloud storage services) is around £520. The cost rises to £850 for four cameras and £1,400 for eight cameras.

It’s worth mentioning the relative ease with which wireless systems can be installed. Unlike traditional wired security cameras, professional assistance isn’t always required. If you can handle the installation independently, you can lower the overall cost.

On the other hand, cloud storage capabilities may push the total cost back up again. It’s common for manufacturers to include a small amount of data storage space in the original product price. However, it’s never enough space to run an efficient and effective CCTV system. You will need to buy more. Keep this in mind when browsing for the perfect system.

It is almost always more affordable to subscribe to a data storage plan as opposed to purchasing storage space piecemeal. These deals normally include coverage for a specific number of cameras so, under their terms, all included feeds are recorded and stored in the cloud where you can access them at any time.

The Final Word on Installing a CCTV System At Home

Unless you have extensive knowledge of electrical systems, the best option is always to spend a little more on a professional installation. That way, you get the peace of mind of knowing your home CCTV cameras are performing optimally and providing maximum protection for your property.

To discover the lowest prices for CCTV equipment and installations, chat with our friendly team. We have access to hundreds of the country’s top home security providers and can deliver accurate industry-backed cost estimates. Complete the form on our website to get in touch and get your quotes.